During WWII Navy oilers were named after rivers. USS Neosho was named after a river in eastern Kansas and northeastern Oklahoma. It’s purpose was to refuel warships. She did far more than that in WWII.

When the Pacific Fleet moved to Pearl Harbor, the oil tanks at the Base needed to be filled. It was Neosho that made trips to the California and back to ferry aviation fuel.

Battleship Row was an unfortunate place for any ship to be on December 7th, because it was the prime target of the Japanese attack. Despite her unfortunate location, Neosho fought back. She quickly fired from her anti-aircraft batteries peppering the sky in in front of the Japanese planes.

Men on the nearby battleships were certainly thinking that having an oiler next to their ship while under attack was not a good thing. Captain Shoemaker, commanding officer of Ford Island saw the proximity of the oil tanks on Ford Island to Neosho’s berthing and hoped that she would move quickly.

Since the tanks had aviation fuel and not oil, an explosion would have severely affected battleships Maryland, Tennessee, and West Virginia. Neosho Crewman and Pearl Harbor Survivor Howard Lee said, “We were a floating bomb.”

The skipper of Neosho was Captain John S. Phillips. He knew he had to get underway for the safety for his ship and those around him. As USS Oklahoma began capsizing, Neosho began preparing to get underway.

She was underway by 08:42 and had cleared Battleship Row by 09:00.  While exiting, she was under attack. Nevada was getting underway at the same time. Submarines and other ships fired at planes and helped protect Neosho and Nevada from strafing by the enemy aircraft.

Neosho dodged bombs, gunfire and torpedoes. She even shot down one enemy plane. There were four near misses on her by the time she reached Merry’s Point landing in Southeast Loch at 09:30.

A wave breaks over main deck, engulfing hose crew, as Neosho (AO-23) refuels Yorktown (CV-5) early in May 1942, shortly before the Battle of Coral Sea. US National Archives photo

Neosho made it undamaged and was able to join a task group in the days following the attack on Pearl Harbor. Her role was vital in fueling ships to fight back. She was now the only  functioning U.S. Navy tanker in the mid-Pacific.

In the battle of Coral Sea, Neosho was attacked severely. Her flat top caused enemy pilots to mistake her for a carrier.  They

She lost 182 of her 293 men. Many died jumping overboard and others drifted away in lifeboats. After the destroyer, U.S.S. Henley rescued the rest of the crew she fired torpedoes and shells to sink Neosho and keep the Japanese from getting her.

This oil tanker Neosho and her crew did far more than expected of an auxiliary ship both at Pearl Harbor and the Battle of Coral Sea. 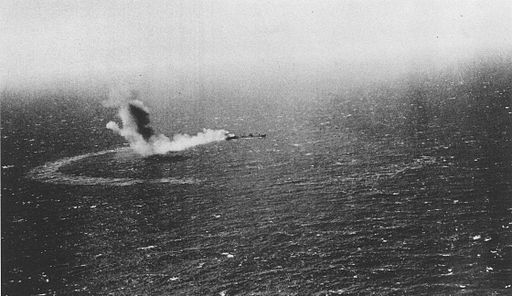 Neosho is burning after an attack by Imperial Japanese Navy dive bombers on 7 May 1942 during the Battle of the Coral Sea.

Commissioned into service in the US Navy on December 21,...