Before Pearl Harbor was attacked, other military installations on Oahu were hit. The bombers were specifically targeting aircraft in order to prevent American forces from getting airborne and fighting back. 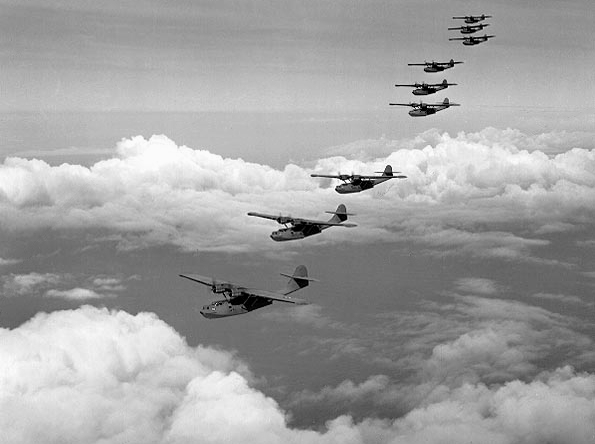 Nine U.S. Navy Consolidated PBY-5 Catalina patrol bombers fly in formation in the Hawaii area, circa November 1941. These planes, from Patrol Squadron 14 (VP-14), arrived on Oahu on 23 November 1941. The plane closest to the camera is “14-P-1”, which on 7 December 1941 was flown by Ens. William P. Tanner during the attack with USS Ward (DD-139) on a Japanese midget submarine. Most of the other planes were destroyed at Naval Air Station Kaneohe Bay.

The PBY-5 Catalina patrol bombers, known at the PBY flying boat, is a seaplane with a range of 2,000 miles. With such a long range, it would have been able to follow the attacking planes back to their aircraft carriers. PBY’s were capable of carrying four 500lb bombs. They were a threat to the Japanese forces attacking Oahu. 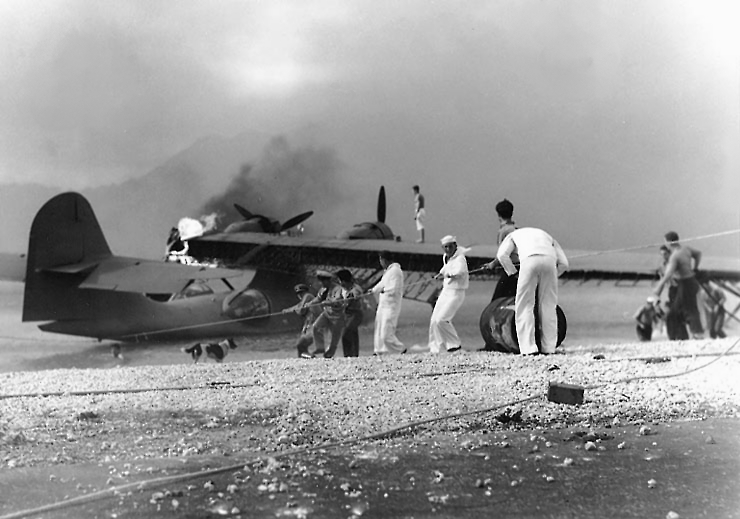 U.S. Navy sailors attempt to save a burning Consolidated PBY Catalina flying boat at Naval Air Station Kaneohe Bay on 7 December 1941. This plane was set afire by strafing in the the initial phase of the attack and was sunk in a later strike. Note the dog observing the work.

Aircraft wreckage and a badly damaged hangar at Naval Air Station Kaneohe Bay, Oahu, shortly after the Japanese air attack. The plane in the foreground is a consolidated PBY Catalina of Patrol Squadron 12, marked “12-P-3”.

When the PBY and Kaneohe Bay was attacked, eighteen sailors and two civilians were killed. Sixty-nine others at the base were injured.