Launched in 1919, USS California (BB-44) was a proud ship, the flagship of the fleet. She held that title for 20 years from 1921 until 1941. A seemingly carefree ship, California was nicknamed “alky barge” 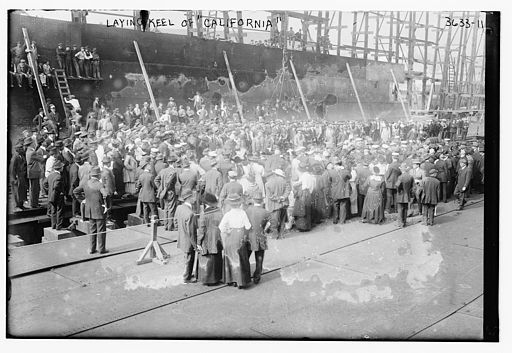 California was a well built Tennessee class battleship. Like USS Tennessee, which was also at Battleship Row, California was capable of 21 knots and had 12 14-inch guns. 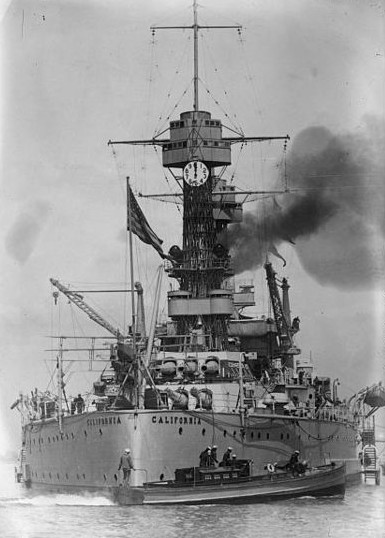 USS California was younger than USS Arizona (BB-39, 1917), but not the youngest battleship at Pearl Harbor. The youngest was USS West Virginia (BB-48, 1921). Along with these ships, California deployed to Hawaii with the Pacific Fleet in 1940.

USS California During the Attack

On the morning of December 7th, 1941, USS California was moored at the southernmost location on Ford Island’s Battleship Row. This was an exposed position. To add to the danger, she was preparing for an inspection on Monday, December 8th. Preparations left her watertight integrity compromised.

Shortly after the first bomb fell at 07:55, general quarters was sounded. The men began immediately closing hatches and bulkhead doors. The attack was occurring so quickly that she was unable to get all hatches and doors closed before the first torpedo hit.

California did not have a ship moored next to her, therefore, like Nevada, she had the ability to fire her guns at attackers without concern. The machine guns were able to open fire on the torpedo bombers at 08:03.

At 08:05 the first torpedo hit California. The second came moments later. A gaping hole in the ship caused her to start capsizing. She underwent counter-flooding preventing a capsize.  Unfortunately, the compartment where the ammunition was stored was flooded and could not be accessed. 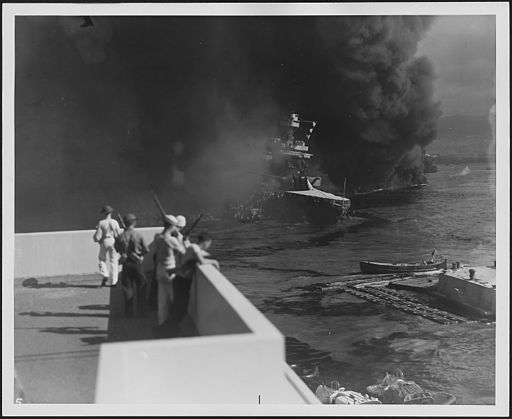 She lost power, when saltwater from the explosions got into the fuel tank. Power was restored in time to fight fires. Her crew was ordered to abandon ship because the fires became too much, but that order was rescinded as the fires subsided.

California attempted to launch her planes, but it was unsuccessful as one of the planes capsized.

A number of bombs fell near the ship, causing little damage, but a 551 lb bomb hit the deck of California killing 50 men.

In total 102 died aboard USS California. 62 more were wounded in the attack.

California had settled into the mud. In March 1942, she was floated and dry docked at Pearl Harbor shipyard for repairs. By June, she was able to cross the pacific to the larger Puget Sound Navy Yard on her own power. 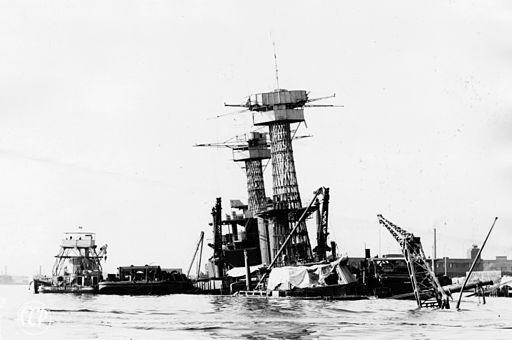 In January 1944, repairs were complete and California was ready for battle again. In May 1944 she was fighting in the Marianas. As World War Two continued, California was hit by by a Kamikaze, but continued fighting.

In 1959, California was sold for scrap metal.

For a personal story about California before and during the attack, read 100 year old Mr. Wayne Shelnutt’s fascinating recollection.