A Mitsubishi A6M Kansen AI-156 Zero fighter on the IJN aircraft carrier Akagi in Hitokappu Bay in November 1941 prior to departing for the attack on Pearl Harbor.

Japan attacked Pearl Harbor for a few reasons. The reason for the attack and the goal of the attack are not the same.

Japan had seen successes in previous years by attacking  and colonizing Korea, and defeating Russia, and China. With goals of expansion in Asia and the Pacific, Japan saw an increased need for natural resources (steel, oil, minerals). They looked towards China, Indochina, and the Pacific to meet these needs.

In 1939, President Franklin Delano Roosevelt ordered the US Pacific Fleet to move from California to Pearl Harbor, Hawaii.  This move was seen as a threat to Japan and her desire for expansion in the Pacific.

A Pacific War had been discussed for decades by both Japanese and U.S. Militaries. During this period within the Japanese government, there were many hawkish politicians and military leaders. Many of them saw a war between Japan and the United States as inevitable.

Their solution to this inevitable war was to attack first. Their target was the US Pacific Fleet at Pearl Harbor, Hawaii. But Why?

Japan’s goal was to destroy the US Pacific Fleet and crush the will of the American people.

Japan attacked Pearl Harbor in hopes that it would destroy the US Pacific Fleet and weaken the resolve of the American people. They hoped that the defeat at Pearl Harbor would be so devastating, that Americans would immediately give up. The goal was a quick US capitulation allowing Japan to continue imperial expansion.

Was the Attack Successful? 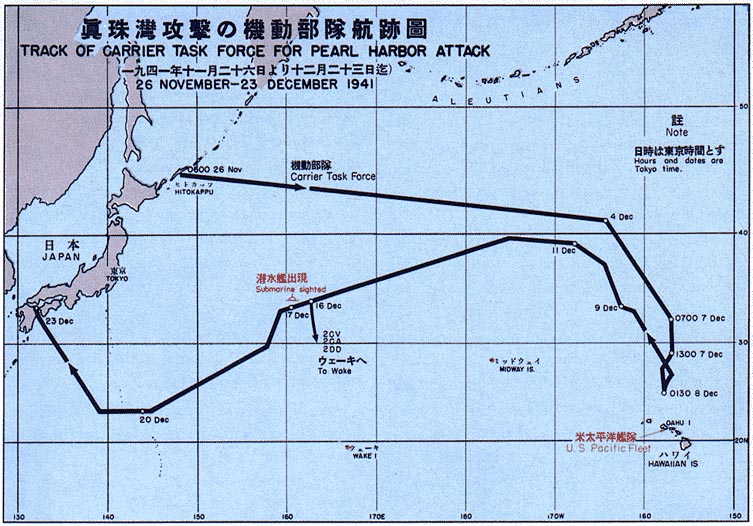 The routes used by the Japanese fleet to approach and attack Pearl Harbor.

The aspect that was successful, was the surprise. Kido Butai, the Strike Force of the The Imperial Japanese Navy (IJN), successfully traveled 3,000 miles undetected and attacked without warning.