USS Nevada Beached at Hospital Point after the attack.

Battleship USS Nevada (BB-36) was the lead ship of the Nevada class battleships, which included her sister ship USS Oklahoma. 27,500 ton Nevada was launched one year before USS Arizona as the first super-dreadnaught, making her the eldest of the battleships at Pearl Harbor.

Nevada fought in WWI in the Atlantic fleet and moved to the Pacific Fleet in 1930. She was stationed at Pearl Harbor when the Pacific fleet moved from California in 1940.

On the morning of December 7th, 141, USS Nevada was moored about 75 feet aft of USS Arizona.  She was one of the most exposed battleships on Battleship Row when the torpedo bombers began their attack. There was no ship moored next to Nevada to protect her from torpedoes.

The attack began at 07:55 and the torpedoes were already in the water before general quarters was sounded. Nevada was hit by a torpedo at 08:03. Moments before the torpedo hit, her crew was already preparing to get underway.

Being moored alone brought the advantages of easy escape and of freedom of movement when the crew began firing on enemy planes. In fact, Nevada shot down the plane that hit her with a torpedo seconds earlier. The USS Nevada suffered severe damage when she became the target of the attackers. 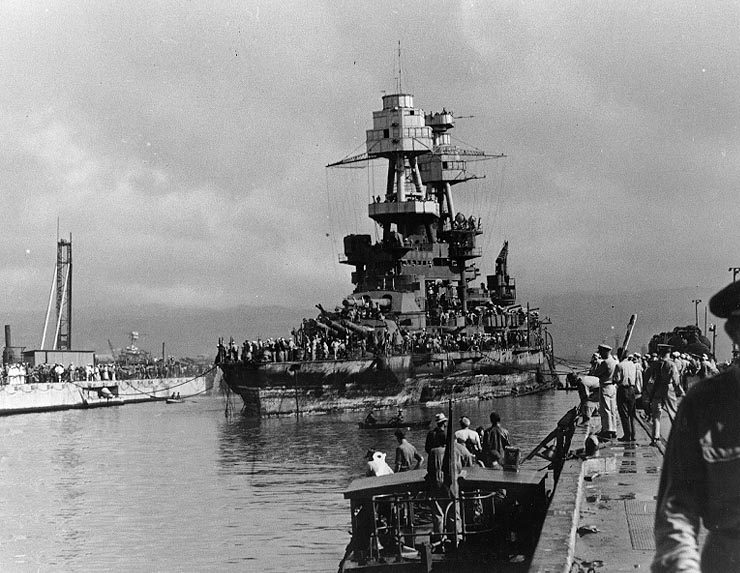 Retired Chief Warrant Officer Henry White poses at the USS Nevada (BB 36) Memorial during a recent visit to Pearl Harbor. White was stationed at Pearl Harbor’s Hospital Point as a Pharmacist 1st Class during the Pearl Harbor attack on Dec. 7, 1941. The Nevada Memorial is located where the sinking ship intentionally ran aground to avoid blocking the channel after getting underway during the attack. U.S. Navy photo by Journalist 2nd Class Tim Walsh.